A restaurant that boasts a button that lures you to ‘Press for Champagne’ is one that I needed to try for myself.  An even better button would be ‘Press for Time,’ as having time these days is as precious as a Cristal bottle. Being in the Generation X, which means we are stressed and time-poor, friendships are often left behind in the cold. As a mother of two young ones, my life has been upstaged by other obligations.

I remember those days fondly when all I had to think of was 1) What I was going to wear for dinner 2) Where I was going for dinner and 3) Who was going to accompany me to said dinner. ‘Once you have children’, a SuperCareerWoman I know once explained to me ‘There are only so many hours in a day to do everything. We have six priorities that we try to fulfil in a set amount of hours. Something has to give eventually.’ The six priorities are: 1. Spending time with the children 2. Having a career 3. Keeping a close and connected relationship with a husband or partner 4. Staying and being Healthy, including working out or zumba-ing 5. A social life of some sort and finally, 6. ‘Me’ Time’ (the latter which really doesn’t count as a priority, as it doesn’t actually exist).

Well, Bob Bob Ricard seemed like a good place to take care of number 5, for a while at least. I invited 10 friends and waited to see who would show up. The answers were as follows: ‘Sorry. In Copenhagen/Dubai/Paris on work trip.’ ‘Sorry I am renovating/moving houses. No time.’ ‘Sorry I had a crying baby/husband all night, exhausted and can’t get away.’ Finally, 4 out of the 10 showed up, which these days, is a relative success (there was a moment there that I thought I would be sitting on my own pressing the button non-stop to drown my depressing lack of friends).

Bob Bob is a ‘spectacular’ restaurant from a Russian and English collaboration. It famously was given ‘no stars’ by AA Gill who described it as ‘Liberace’s bathroom dropped into a Texan diner,’ while winning the Global Design Award and Best New Design at the Wallpaper and TimeOut Restaurant Awards, respectively. TimeOut said it seemed loosely based on the Orient Express meeting an American diner. Marina O’Loughlin and the bald guy from Masterchef loved it. It is a theatrical, mirrored, all-booth restaurant that you have to see with your own eyes to judge clearly. 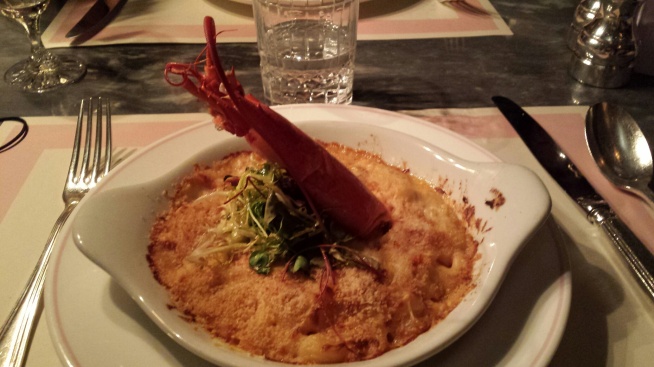 Our dinner and menu were as controversial and golden as the interiors, really not to be taken too seriously. I had a Seabass ceviche as a starter (which was good but a Size 0 if it had a waist size), while the Lobster Mac & Cheese was a good Size 10, yummy but I should have had it as a side rather than a main. The desserts were the highlight with a wonderful soufflé and a chocolate bomb that was chocolatey and a spectacle in its own right: a golden globe melted open by hot warm chocolate lava (see below).

As an experiment, we pressed the Champagne button to see how long it would take for our wish to be granted. Someone arrived in 18 seconds. Definitely beating the Airline stewardess’ time. Sadly, a tray of Dom Perignon/Moet&Chandon/Veuve Cliquot/Cristal didn’t appear as I had hoped for, but a waitress with a Champagne Menu. From it, we were able to order our £18 glass of Tattingers. All in all, it was an enjoyable, fun, girly, evening out, which reminded me of the days when my time was spent on my girly gossip sessions, drinking endless amounts of cocktails and champagne, without worrying about how many times I would have to wake up in the night, while discussing our latest dates and boy troubles. Its prices are fit for a Tsar, its food as whimsical and playful as Russian dolls and it takes us back in time, to a time where Liberace meets the Orient Express, or even to those carefree days when all I had to think about was myself.