Cut-Outs vs. Butt-outs: Matisse vs. Kimye

Two ‘once-in-lifetime’ events have recently just occurred: April 2014 saw Matisse’s Cutouts opening at the Tate Modern, a historical and unmissable event bringing together all of Matisse’s most important cutout works, and May 2014 saw the most ridiculously over the top wedding of all time, golden wedding toilet and all; Kim Kardashian’s wedding to Kanye West. Kimye’s wedding kiss became the most ‘liked’ picture on Instagram. But the similarities between the two events end at voluptuous, naked women with large bosoms and bottoms.

The 21st century is laden with reality stars taking over the world and covered on every magazine, newspaper and social media cover. I despair to think that my children are growing up in a world with role models such as Kimye. Yes, she may be (artificially) beautiful and I am sure she is very ‘nice’, (her and her artistically enhanced derriere), but what is she really teaching our children? That constant bitching, plastic surgery, a world of materialism and superficialism, multiple weddings, and excessively spending ridiculous amounts on the aforementioned multiple weddings is an entirely normal proposition? Luckily, the Matisse exhibit at Tate Modern keeps my hopes up that we still have role models everywhere for our children, if we just open our eyes beyond the Kimye Press.

(The Mermaid and the Parakeet)

Going to this Matisse exhibit, (Matisse happens to be one of my favourite artists), was truly an unmissable event for me. The juxtaposition of Kimye’s vacuous and superficial reality life splashed all over the tabloids next to Matisse’s Cutouts and his life as an artist in the Daily Mail is unreal. How far we have come in 60 years from his death in 1954 to 2014. I will try not to go on like many Art Critics, writing verbose, possibly pretentious articles, that frighten most normal people with their diarrhea of adjectives, to describe what I saw (you can read all these articles online at the Telegraph, Guardian, and Times) but I hope to give you a ‘simple’ take on his world, his art, and his ‘genius’ (unlike the ‘genius’ called by Kim’s mother describing Jaden Smith in his white Batman suit).

Matisse didn’t enter the art world because of pushy parents. His father wanted him to study law, but Matisse was introduced to art by his mother after a bout of appendicitis. He was ‘hooked,’ as one would say, and would become one of the most influential modern artists, next to Picasso. Matisse started his Cutouts late in his life as an artist, in his 70s, after a close encounter with death and major surgery, in what he calls his ‘seconde vie’. Despite his ill health, for Matisse this was his second chance at life, which gave him the freedom, ‘liberte,’ to truly express himself. Initially, the critics called his work ‘child-like,’ but I think he was trying to teach us to look at the world as if we were looking at it for the first time, like a child, to see beauty in the simple things. He used simple methods of paper, cutting and painting to cut out flowers, fruit, and seaweed. Simple, beautiful, objects we often overlook every day because of the busyness of our lives. He was then able to use the inspiration of a lifetime and translate it into artworks to create some of the most alive, dynamic and beautiful pieces of Modern Art. 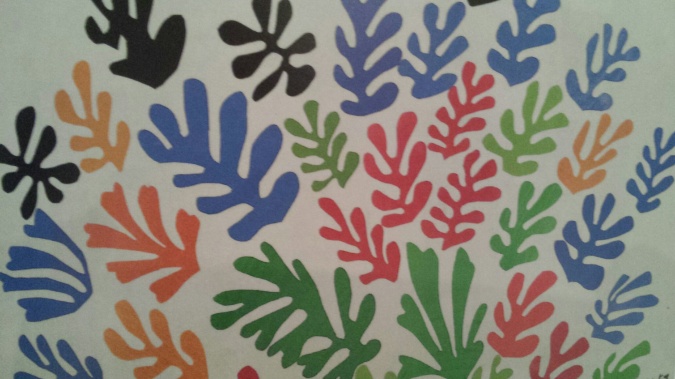 He is known as the best colourist in the 20th Century and his vibrant colours of Blues, Yellows, Green, Yellow and Purple are reminiscent of a child’s painting palette. He manages to create movement through his cut paper and uses his paper cutouts, pasted on top of background paper, to create texture and contrasts of colours. Other themes of his Cutouts are Dancing, Jazz, Ballet, and the Underwater World of Tahiti, all subjects close to his heart and mine. Years before, Matisse had made a trip to Tahiti when he felt a lack of inspiration and there he spent days snorkelling and basking in the sun, and later used fruits, seaweed and palms from that trip to create ‘Oceania the Sea’, and ‘Oceania the Sky’. His ‘seaweed’ and ‘corals’ that he uses over and over in his cutouts, which you can see in ‘The Sheath,’ and ‘Decoration and Mask,’ show us where he was most at peace and happy; underwater surrounded by bright, vibrant light and colours not visible in the overwater world. When he was bed and wheelchair ridden, he was able to re-create scenes which he was now no longer able to enjoy, like the underwater sea, and also create a garden in his studio by pinning cutouts onto his walls.

What Matisse achieved in doing, despite his infirmity, his age, and his critics, was to create a new form of art which was alive, vibrant, and in his mind, full of clarity. While he was unable to move freely, he was still able to bring gardens and the seashore right to his bedroom. He was able to make dancers dance for him, to tell tales of Icarus and 1001 nights through his art and to recreate himself as an artist. For him, this was a rebirth, a second chance to see life differently and wanting to live it fully against all odds. This is what he can teach and inspire my children. Unlike a Kardashian, whose lustre will fade as her wrinkles multiply, her bum sags with age, and her money won’t save her from being replaced by the next prettier, younger thing. 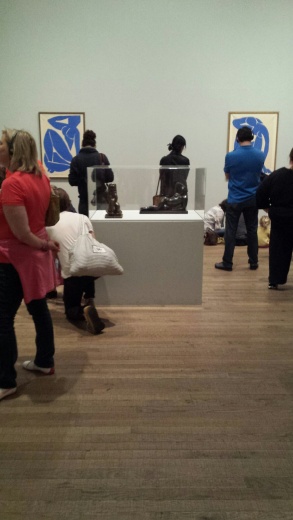 (Family sitting below the Blue Nude on the Right, cutting out and reproducing Matisse’s works of art).

Five Matisse Cutouts you should know about (or at least appear to know about at a dinner party):

1. Blue Nudes Series: There are four of them and are his most popular and recognisable pieces aside from the Dancers painting.

3. The Snail: Matisse’s slight exploration into abstract art, until he realised he should leave it to Picasso.

4. The Parakeet and The Mermaid

3 thoughts on “Review of Tate Modern’s Matisse Cut-Outs: The Cut-Outs vs Butt-Outs”