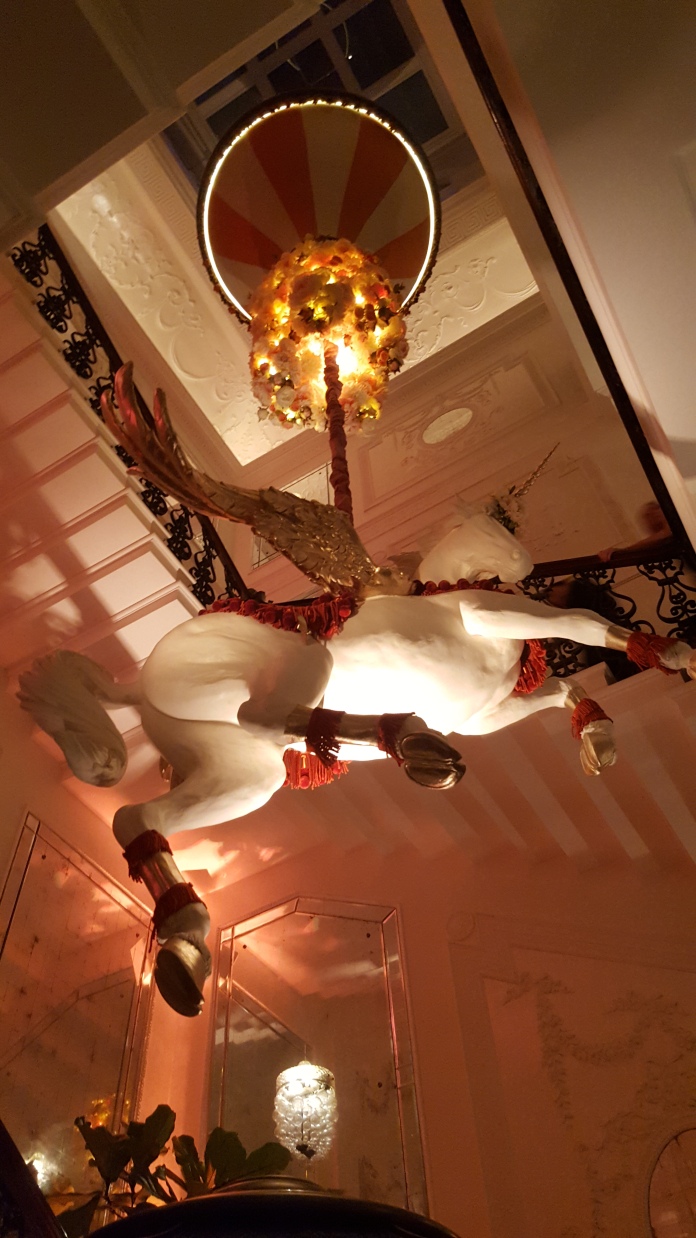 A few weeks ago, a new giant opened in town: the newly renovated Annabel’s on Berkeley Square, inhabiting 26,000 square feet in the middle of Mayfair, with a £60 million renovation price tag on it. Of course when the opportunity came up to go, I said ‘yes’ faster than a Londoner says yes to sunshine. And it is spectacular, in so many ways. There are not a lot of places that could pull off a pale pink staircase with a hot air balloon suspending a white unicorn in the air. But Annabel’s manages to pull it off.

Richard Caring who re-opened this club seems to have one thing in mind: to blow out any of the competition out of the water. What I mean by that, is that he clearly hopes Annabel’s takes over as London’s newest, brashest, boldest and beautiful private member’s club, luring members away from the Arts Club and 5Hertford Street. And so far, it looks like he is doing a good job.

We ate on the ground floor in their piece de resistance outdoor garden which has a retractable roof and it was a beautiful, balmy evening that you could be anywhere, in Miami, or the South of France or Italy, or right here in London. It is a mix of Richard Caring’s Ivy Chelsea garden with plants, flowers, trees, flora and fauna but with the Arts Club’s polished elegance. The food? Well, the food was secondary, I only had eyes for that garden, but it was still good in an Ivy-kind of way.

Upstairs, there is a lush, colonial opulence in the Elephant Bar, with images of elephants everywhere and a colourfully painted jungle wallpaper. Next to it is a private dining room with what looks like a giant Italian murano chandelier hanging from a ceiling full of carefully carved cornices and there is another private dining room which looks like a white wedding venue.

Oh and the women’s bathroom on the 1st floor is just the most Instagrammable bathroom I have ever seen: the ceiling is made of thousands of roses, the swan taps trickle with water into pink sinks and the lighted mirrors make you feel just like a star. You could just bring the party in there and spend the whole night here.

The place is huge – upstairs is the Mexican, which has a cosy, but completely different feel to the rest of the club, and downstairs is the nightclub, which has a small dance floor and lots of place to have dinner. Right now, there is plenty of buzz around Annabel’s that I’ve already been twice in one week, but I wonder how it will stay full once the buzz has died down. We managed to dance to some oldies-but-goodies, from ‘Bamboleo!’ to ‘It’s Your Birthday,’ which brought me back to 2003. I hear that they are trying to lure a younger crowd, but so far, I haven’t seen it happen and feel comfortably not-too-old there. It is still very much an ‘older-crowd’ territory. 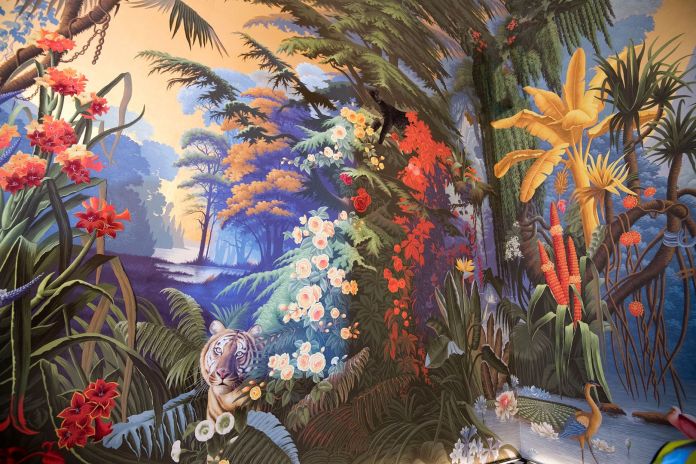 Wallpaper in the nightclub courtesy of the internet. NHYM 2018.

Annabel’s is a design feat. The mixtures of colours, themes, art and decoration manages to come together and make something spectacular, but at times overwhelming. It is the opposite of minimalist: Everything here is maximalist, from the loos to the walls.  Everywhere you turn, there are intricate details and designs that have been carefully thought out and the place could be considered completely garish, but somehow these over-the-top themes, colours and details work together. So for a fun night out in a group, Annabel’s is great. Just don’t expect monochromes and geometry here, it’s all about letting your imagination run wild.