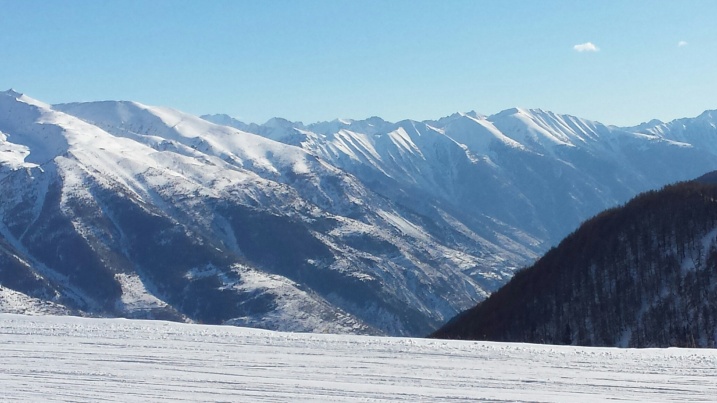 There are two camps in this Battle: the Skiers and the Sunners. The Skiers tend to be athletic, sporty and have a need for an Adrenaline Rush, the Sunners, well, you could either call them the Lazy Ones or the Intellectual Ones. I’d rather call them the Intellectual Ones, who, like myself, are satisfied with the only activity of reading books while sipping a margarita cocktail on my sun lounger with waiters coming by with fresh fruit ever half hour while working on my tan.

After coming back from a week’s holiday of Skiing in the Alps, to a place we shall call Valdeblore, I am reminded that I am firmly, and always will be, in the Sunny Holiday camp. I was swayed this year into thinking that a Snow Holiday would be great for the kids, who are ready to learn to ski, just as they should learn how to swim. Very valuable asset to have. Therefore, off we went on a Ski Holiday with 2 young children in tow. I quickly realised my mistake and longed for the tropical holidays my friends were sending me messages from; ‘Happy New Year from the Bahamas!’ Hello from Hawaii!’

Top 10 Reasons why I choose Sun over Ski

1. Packing: Packing for a Sun Holiday is the easiest packing you will ever have to do: bikini, sarong, flip flops, sunglasses and you are set. Now that the Kindle exists, it is even easier, no need to lug 7 paperbacks like I used to (ave. 1 book read per day in my heydays). I can fit my clothes and two children’s clothes in just one suitcase! Amazing! This past week, I had to pack for myself and my two toddlers, my husband, my mother which meant 10 thermals, socks, 5 Snow Suits (which take up a lot of space), 5 snow boots, 5 regular boots, 5 Ski-Warm Clothes and 20 town outfits, and the list goes on until we somehow ended up with 7 suitcases, 2 backpacks (one for skiing, one for carrying children), 1 travel cot, 1 buggy, and all of our Ski equipment.

2. Equipment: Like I mentioned before, the Sun equipment necessary now really boils down to a Kindle and Sunglasses. Perhaps a Dive Computer for the Dive Aficionados. But Ski Equipment? Ski Boots, Ski Poles, Skis, Gloves, Goggles (in case you get stuck in a Snowstorm like we did last week), and then you actually have to carry it all! And your children’s. And then you end looking like a Robot from Transformers will all this gear. I watched parents struggling to carry all of their and their children’s equipment down some stairs while their children were too scared to walk down by themselves, screaming and crying out of exhaustion and cold while I watched on, feeling sorry for them but unable to help because I was already carrying my own ski equipment plus my daughter’s helmet, gloves, skis, ski boots and prayed I wouldn’t lose any of them, which could set off a world-war-3-tantrum.

3. Travel: So both require plane travel in general (except those who want to brave a 13 hour car ride with their children in the back, but no thanks, better you than me or overnight train rides. Really? Again, not for me), but at the other end, car rides are almost essential for the Skiers. For Sunners, the best case scenario is to get to your final destination by speedboat from the airport like in the Maldives, (https://nottinghillmummy.com/2014/04/19/top-ten-best-hotels-in-the-maldives/ ) which frankly is just much sexier than you in an oversized 7 person Family Car rental full to the brim of ski equipment and bags falling over right, left, and centre with each turn. And you know how much I like Boats. https://nottinghillmummy.com/2014/08/07/i-like-big-boats-and-i-cannot-lie/ Then to reach the mountains, it will take a few hours drive from the airport to the final destination, in what are not the most easy conditions. Windy, icy roads on a mountain’s edge which threatens you at every turn to fall into the abyss, while my children both turn Green after the third windy turn. Eldest daughter vomited on the way up, youngest daughter vomited on the way down. Cleaning up vomit in a car on the side of a dangerously freezing road with one or the other child crying is just not very fun.

4. Clothes: This is really an extension of points 1 & 2. The ease of slipping into a bikini and pareo in the morning before heading off to a luxuriant laid out tropical fruit breakfast on the beach is just so much more appealing than waking up early to make sure you’re not missing any daylight skiing and getting dressed which requires military precision: Special-Socks-to-Keep-Your-Toes-Warm, long johns, Thermal long sleeved shirt, Special-Keep-Warm-Shirt-On-Top-of-Thermals, Ski Trousers, Ski Jacket, Ski Hat, Ski Gloves, Ski Boots. Not only do I have to put on all these layers, but then I have to help both of my children put on all of these layers, which if you are a parent know how difficult dressing time can be. By the time they are all dressed up, there are so many layers, they could barely move and found it easier to slide down a snow hill than to walk. All the while, they are complaining about something; too hot, too cold, too tired, ski boots hurt, too grumpy. Why are my children never happy?!

The worst case scenario in a Sun Holiday, like the (only) time my husband was in charge of packing the kids’ bag to go to the beach, is that you forget their bathing suit, which he literally did, and which meant two frolicking naked children on the beach, which is fine if you’re in France, and is even recommended in some places, although, if you were in the US you’d probably end up in jail for child abuse, while they wouldn’t bat an eyelid at the firearm in your purse.

5. Style: Ok, so the Ski Bunny look can be cute and charming with its Furs and Fur Trimmed jackets etc… But then you’d have to fend off PETA Supporters and Avoid Tomato-Snow-Balls headed at you, but seriously, the white sun protection lip block which covers half your face and the frozen, windswept hair and bright red, coarse cheeks after a day of skiing just isn’t a good look. And most Sunglasses/Goggles for Skiing really are just not that Stylish and the suntan around them just really looks daft. Sunny Holiday Sunglasses, on the other hand, can make anyone look good. The bigger the Sunglasses, the better you look and literally anyone can look good in large sunglasses and a Melissa Odabash kaftan. ‘Nuf said. 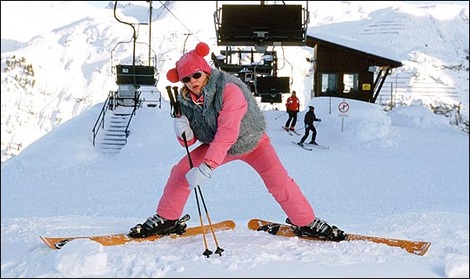 6. Food: Perhaps it was the Ski Station we were staying in, but Ski Food becomes quite nauseating and redundant after a while. After a few days of Tartiflette, Raclette, Fondue, Sausages, Frites, Burgers, Pizzas and More-Cheese-Than-You-Need-for-A-Year, you start to crave fruits and vegetables. The Alps evidently did not get the ‘Five-a-Day-Fruit&Veg Pamphlet from the Government Officials. Perhaps they got car sick and had to go home. But then, when I wanted vegetables or fruit, there were none to be found! In one restaurant, I asked if I could get a side of vegetables, and the waiter looked at me with a blank face, like I had asked for a rare caviar from Odessa. And don’t even think about looking for fruit, it is literally an endangered species up there. So, not only did we all gain 5 pounds and became the chubby family version of ourselves, by Day 5, I felt nauseous just looking at anything with cheese anymore. Not great for my #1 New Year’s Resolution of losing weight, ‘Fighting the Flab,’ and eating healthy.

7. The Actual Sport: For anyone who is like me, a part time exerciser, skiing is hard work. I can just about ski any colour of the rainbow, red, green, blue, white or black, but it isn’t without huffing and puffing, feeling the lactic acid buildup in my legs and being exhausted by the end of the trip. Isn’t a holiday supposed to be relaxing and rejuvenating? Skiing, unfortunately, does the opposite to me; exhausting, stressful with kids who don’t want to carry their skis, and I come home more tired than I left. Another notch against the Ski Camp. Sun Holidays encompass all my favourite things in life; swimming, reading, eating well, and sleeping (whilst it is positively encouraged to wake up at 10am on a Sunny Holiday, the Die Hard skiers/snowboarders will look down at you with contempt should you try to show up on the slopes at 10am). 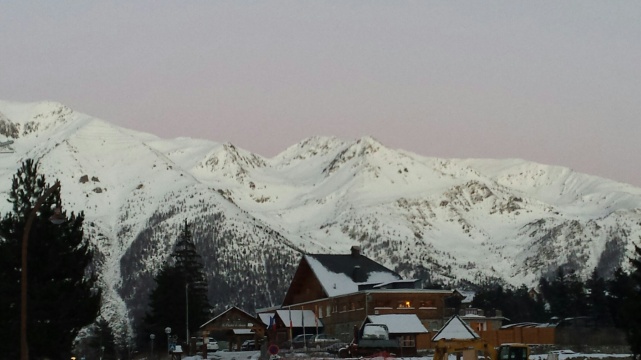 8. Weather: For those who haven’t been in Western Europe for the past week, the week started out snowless. There was barely any snow in the Alps or anywhere in Europe. Even the fake snow machines couldn’t save the day and many stations were shut. The day after our arrival, beautiful snowflakes appeared outside our window, and thinking we must make good use of this fresh snow and powder, we rushed out, early morning to hit the slopes. By mid-morning, no one else seemed to be skiing apart from a few like us. When we arrived at the top of the mountain, we couldn’t even see in front of us. It was freezing at -13C and we couldn’t see anyone or even the piste in front of us. This was a definite sign to go home. By that time, I couldn’t feel my toes or my fingers, my hair was caked in snow and my lips had become so numb and frozen that I could barely form my words, I sounded like I had had too much dental anaesthetic or an overdose of Valium. The skiing was bitterly cold and unpleasant as I began to wonder why in the world we have decided to come skiing to get frostbite in the process. Later, I found out that this heavy snowfall caused massive chaos and stranded 15,000 cars, with people needing to go into emergency shelters in school halls and sports centres. http://www.telegraph.co.uk/news/worldnews/europe/france/11314946/Chaos-in-the-Alps-as-massive-snowfall-traps-15000-cars.html

9. Threats to your Life: At the precise moment in time we were stuck in the blizzard I started thinking of who we would sacrifice first, me or Mr. X. I definitely decided Mr. X. This part is actually serious, but Snow & Ski holidays leads to a huge number of accidents; avalanches, head injuries, snowstorms. Unfortunately, I remember last year hearing about Michael Schumacher’s accident, while he had a helmet on, and thought that I would never go skiing again, and here I was stuck in a snow blizzard. Sun holidays do have their risks, but generally speaking and excluding exceptional natural disasters, risks of accidents Skiing vs. going to a Sunny, tropical destination don’t really compare.

10. If I were Ever Stranded…Mountains or Beach? Of course as we were skiing down the slopes literally in the white darkness, I thought about being stranded in the mountains like in the movie ‘Alive’ and about Alexander Supertramp in the movie ‘Into the Wild’, and whether anyone survived. The question of mountain or beach is a no-brainer; if I were to be stranded somewhere, I would rather be on an island somewhere off the coast of Thailand, me and Leonardo di Caprio on our ‘Beach’ (without Tilda Swindon the dictator of course), drinking coconut water (which happens to be very trendy at the moment), fishing and eating sushi everyday, with grilled banana for dessert. I can’t think of a better way to be stranded.

Eventually, we returned to the Ski station, safe and sound, I hugged my two children, thanking whoever was listening that I had made it back into one piece.  There you have it. Beach holidays always win. Even in the movies.